A subsurface survey involves the use of borehole probes in compliance with the latest safety technology. Holes are drilled to the depth of any expected bombs and lined with plastic tubing. A subsurface survey, also referred to as a borehole survey, is performed in areas where unexploded bombs are suspected, in the vicinity of pile foundations, shoring panels/walls and where sheet piling is to be driven into the ground under the normal detection depth from the surface.

The boreholes can be made with an auger or a hollow drill, or by jetting (the latter method generally being deployed in water).

Safety technology specifies that when drilling the first borehole, surveying should be performed at 2 m intervals. The second borehole can be drilled to the required depth without interruption and then the survey performed. Before drilling each further borehole in the first row, a full subsurface survey should be performed in each borehole. The second row of boreholes can be drilled to full depth without any checks, provided they are parallel to the first row within the search grid.

A radius of 0.75 m enables reliable interpretation of the results obtained with the borehole probe, and therefore the following grids are used for subsurface surveys: 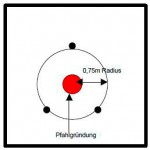 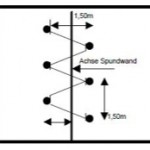 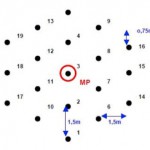